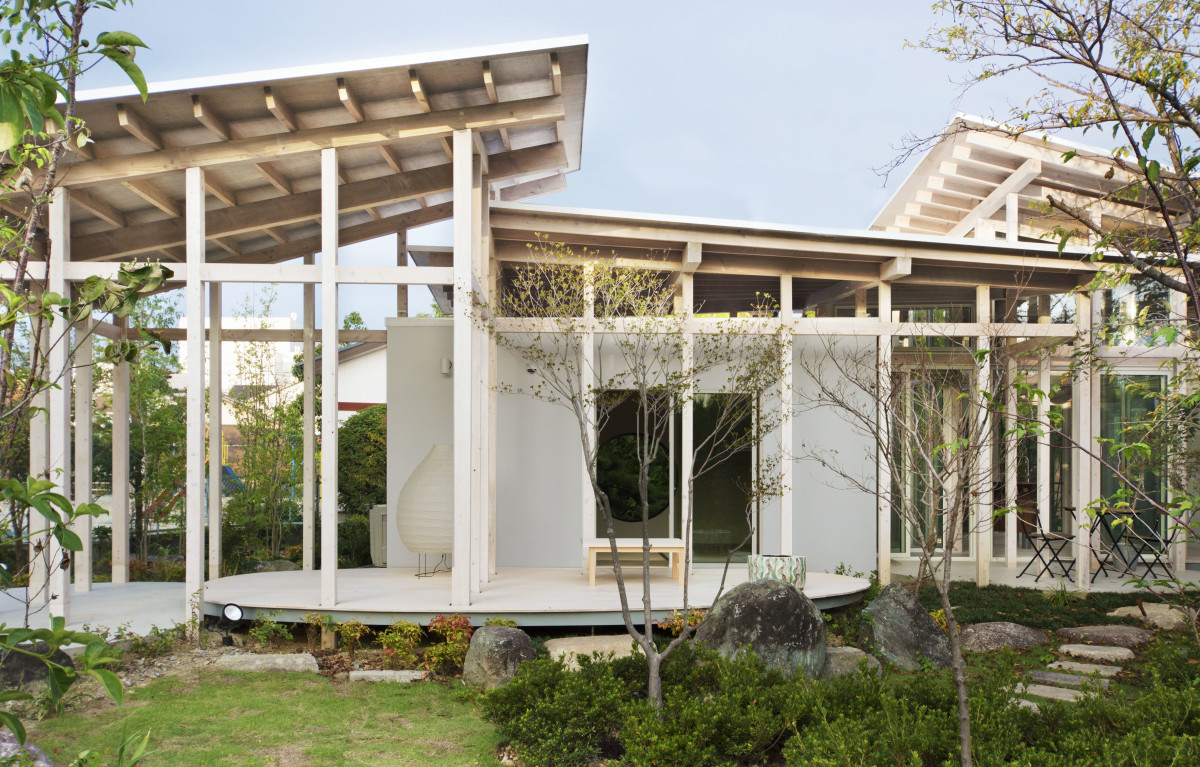 The poetics of wood: between houses and offices

A house surrounded by a hedge and a workspace: gravity, tension and transparency are the key concepts to combine construction complexity and formal simplicity. Based in Okazaki, Nagoya, Japan's geographical center of gravity, studio Velocity narrates a new "hands-on artistic philosophy" where work and experimentation on matter become the quintessence of the project.

A house beyond the hedge

Twelve roofs, one domestic hearth. No interior partitions, no opaque elements. Open rooms, transparent rooms. Rooms with a view of the sky, rooms amidst trees, patios. Thin wooden support pillars dot the ground like tree trunks arranged fragmentarily in space. Like in a wood, living is divided into broken segments. 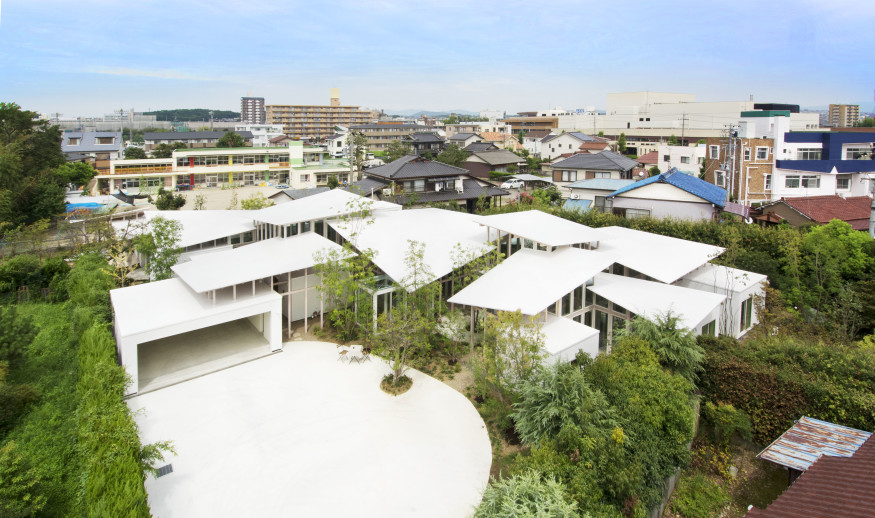 Outside, a hedge "hides the view" and domestic spaces remain hidden, concealed from prying eyes. The city is faraway, almost distant, while the interior dematerializes through completely transparent walls. A transparency accentuated by the structural composition, a dense network of pillars that winds along the entire distribution becoming an integral part of it. 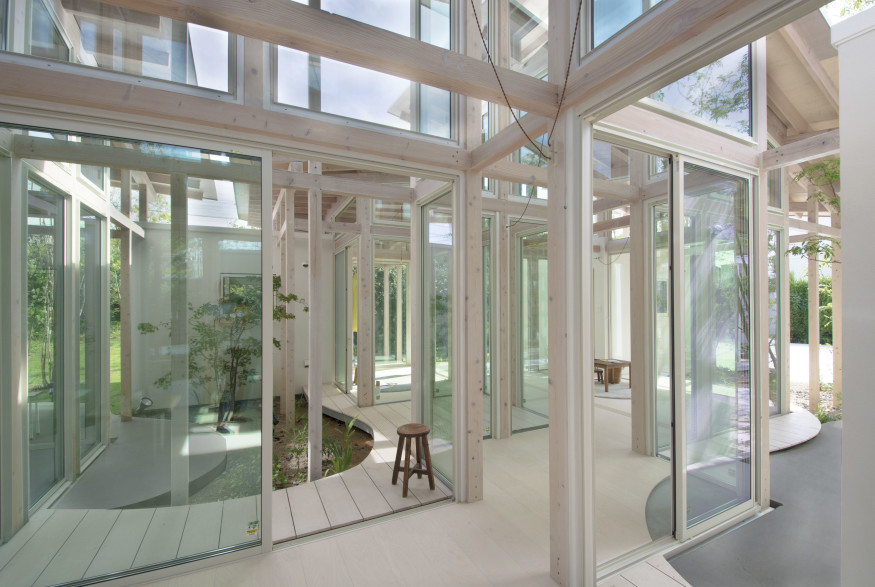 The irregular shape of the lot is only a pretext, a starting point. Living develops horizontally, reformulating the traditional relationship between thresholds. A continuous flow into different, almost labyrinthine areas, guided exclusively by the flooring: a curved, sinuous wooden ribbon connecting the rooms. 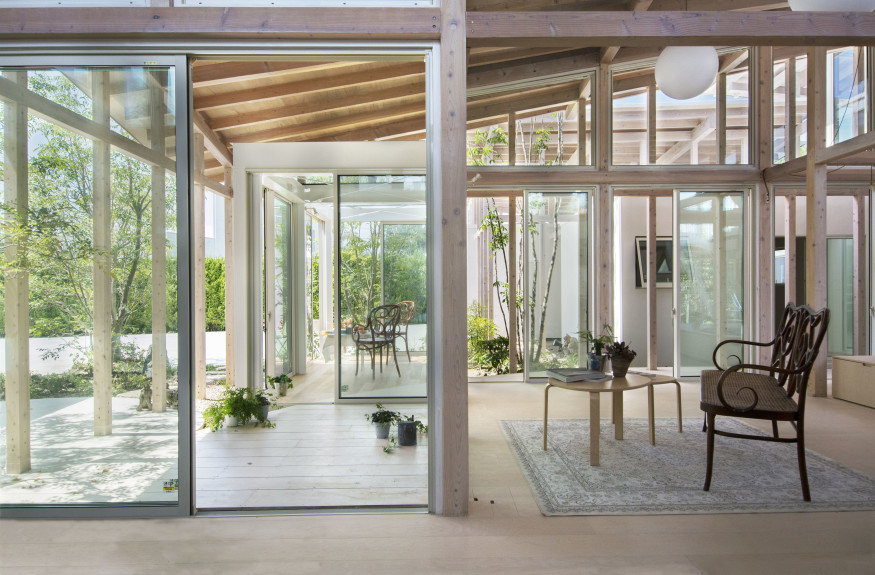 At first glance it is impossible to recognize what is inside from what is outside. The relationships between spaces are infinite, multiplied by the layout of the transparent walls. A reinterpretation of the Japanese house, with opaque nuclei enclosing the actual rooms and a liquid and permeable distribution to connect the different spaces, while the pitches, arranged at different heights and different angles, define the rooms in the house, overcoming the limit between interior and exterior. 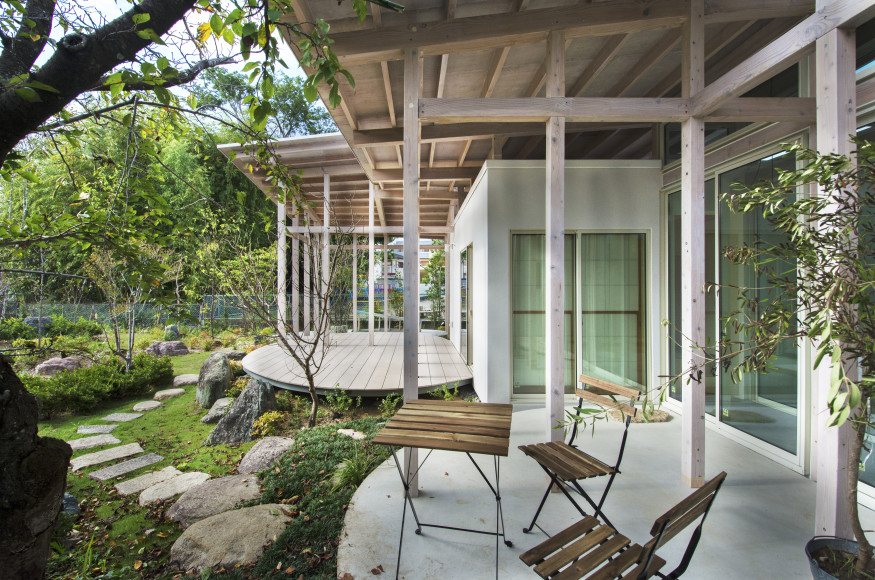 A sinuous roof stretches like a veil. Long, thin and deep wooden beams bend supporting its weight. More than just a formal choice: an experimentation, an act of trust and knowledge of the structural and technological potential of a material. A work of gravity and tension. 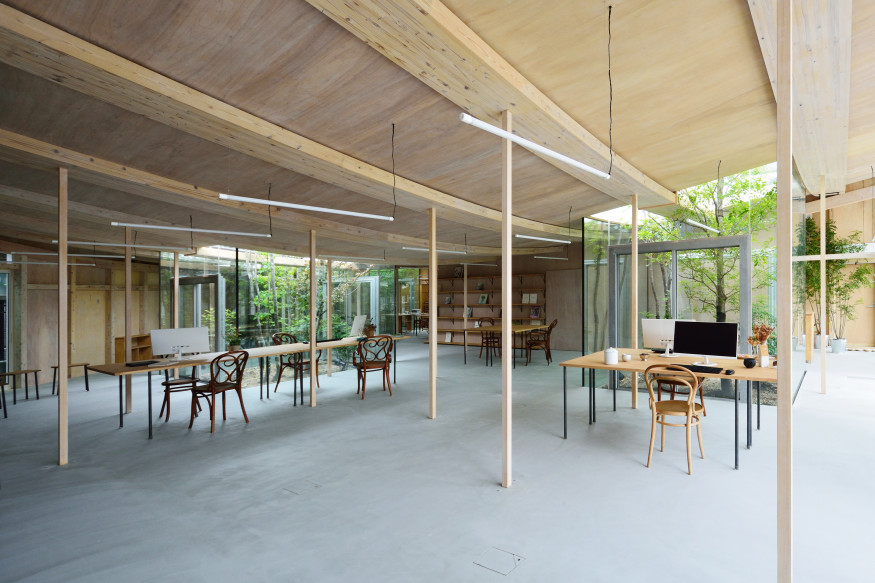 Plywood beams, the result of the design of the matrix planks carefully assembled to ensure different structural responses depending on their position in the light, bend to form the roof. The curvature, modeled on site, is the result of putting a weight of over 20kN in the exact center of the roof itself, causing the morphological distortion of the wood until it is curved. 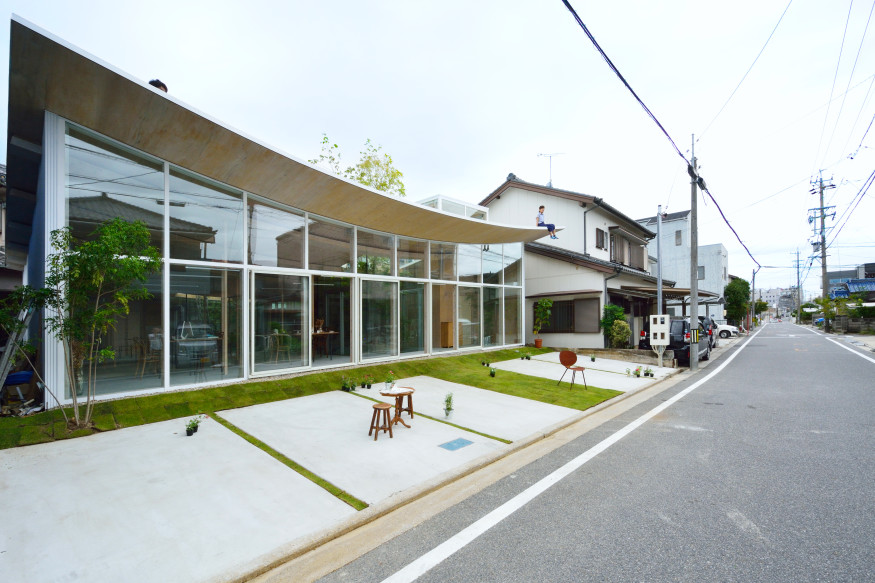 Once the weight has been removed, the force applied ceases to operate on the beam and, to prevent the wood from returning to its original shape over time, pillars capable of working under tension are inserted, so as to maintain the desired curvature. Hinoki (or Japanese cypress) wooden pillars that shape space like thin and independent needles. 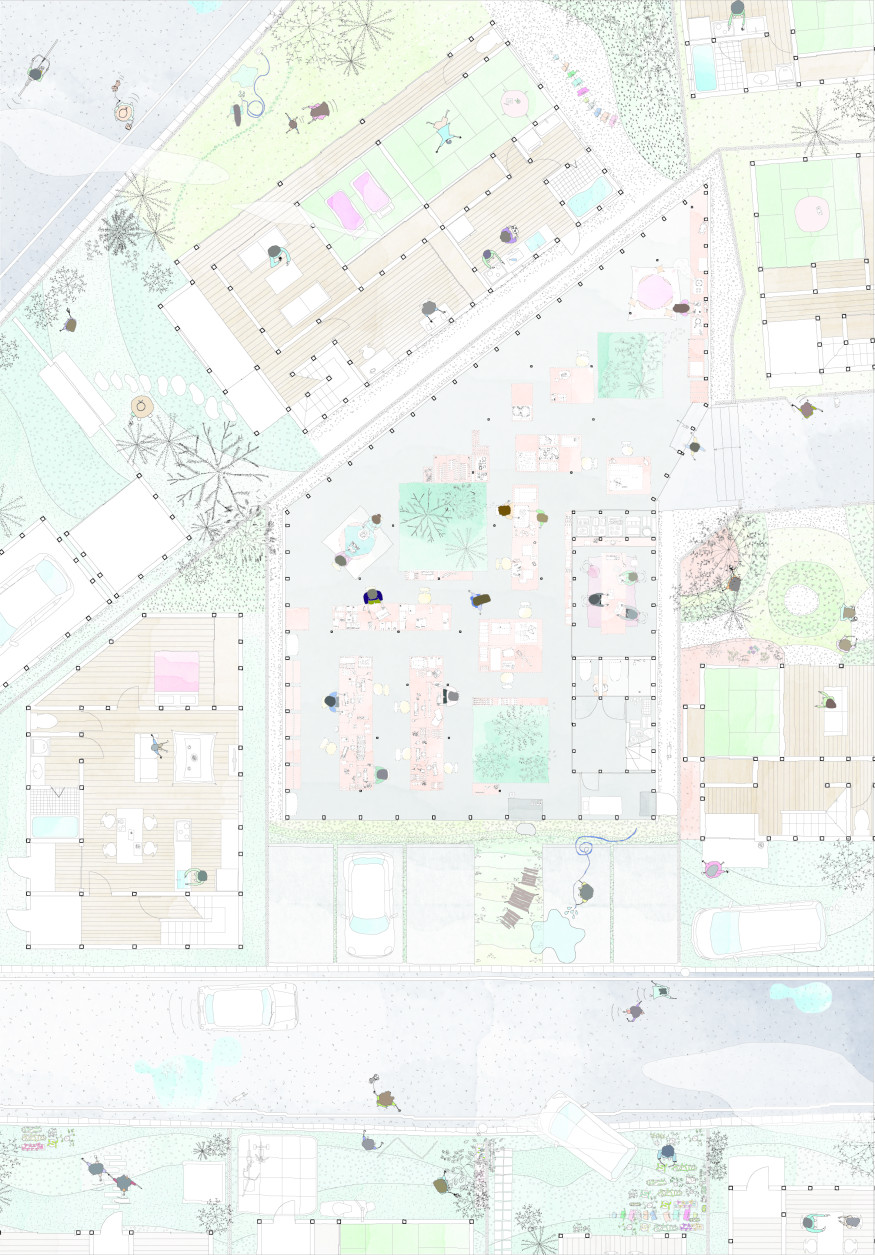 Underneath, a fluid and dynamic open space, flexible to different combinations and uses. On top, an accessible cover, an additional environment, a usable space. A new convivial meeting place between earth and sky. 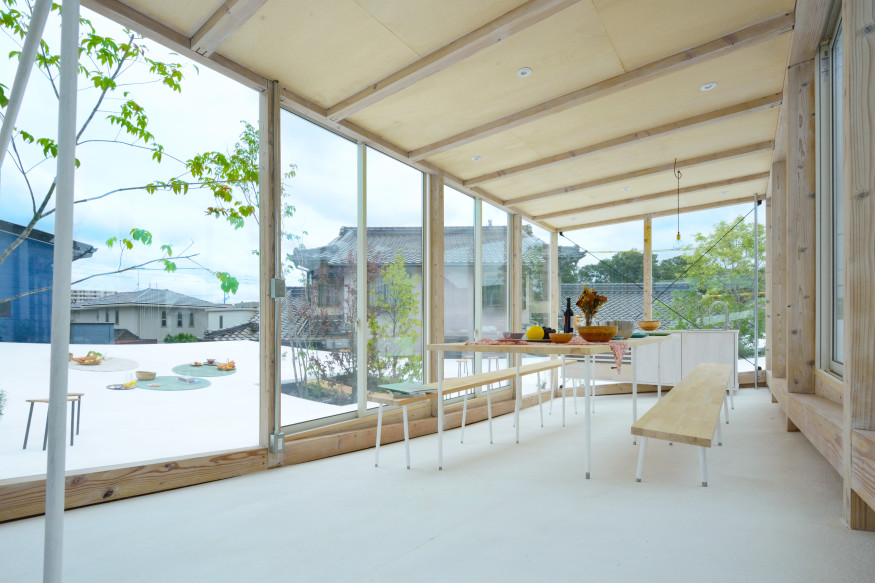 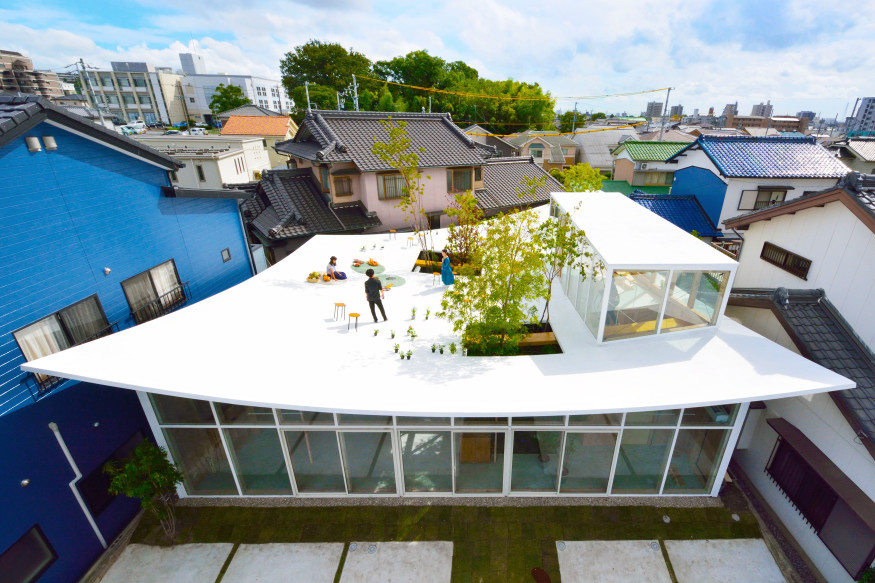 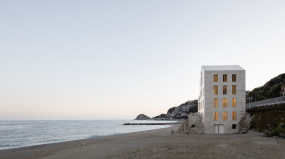 A dwelling on the sea 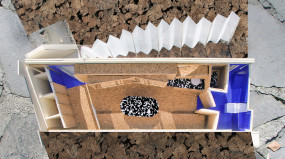 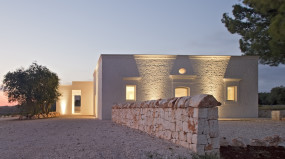