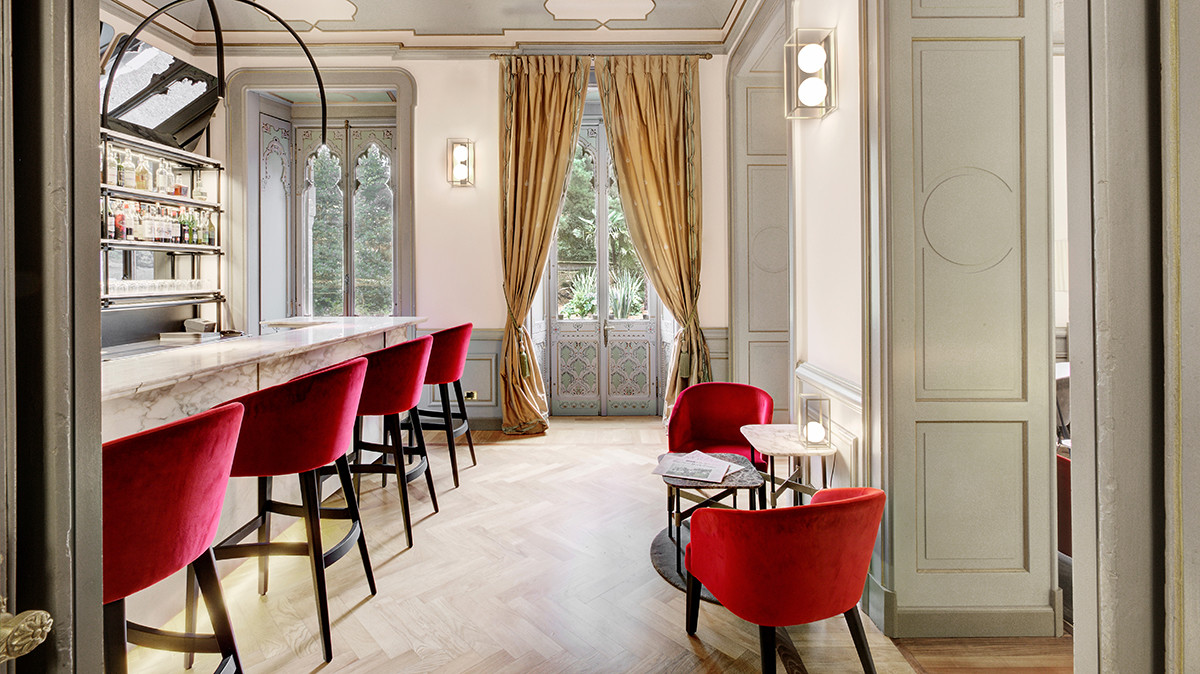 Spaces and objects, architecture and design

The lamatilde firm: innovative and identity-making projects, where the language of composition, of the built environment, merges with the visual one of the company’s new identity.

Ever-changing spaces, interiors and products, which take shape in furniture and fittings finely sewn on the clothes of new hotels and houses, restaurants and shops, museums and fairs. This is the path chosen by the Turin-based firm lamatilde, a hybrid of architecture and design, which over the past few years has become known for its innovative cultural and conceptual proposal. The collective describes itself as a “firm that builds things – for real. Design, strategy and communication are its tools”, moving along four topics, or project categories: spaces, visuals, things and culture.

Lamatilde was born in 2017 by merging yetmatilde, a design and communication firm founded by Michele Cafarelli, Sandro Rizzo, Marco Ruffino and Silvio Tidu, with the architecture firm LAM (Luca Macrì), after years of cooperation which brought the partners to converge on common values and working methods.

Lamatilde firm: a work based on the specificity of the project, on communication and positioning strategies and on technical, formal and product experimentation

At lamatilde, designers aspire to work as general contractors: a single interface that takes the project from concept to completion, guaranteeing quality and cost control, and ensuring all phases are carried out coherently.

Over the past months the firm has completed several projects, from the stores for Gaudenti 1971 to the restyling of chef Cannavacciulo’s Villa Crespi, up to the latest project for a private house in Lugano (Casa TRBC). Spaces which continue, or better strengthen the journey which connects architecture and the building of a visual identity: from the Japanese restaurants “Japs!” to “EDIT”, where a former factory was reused to turn it into an experimental gastronomic space for the entire city of Turin, to the experience for the “Truffle Bistrot” of the Relais San Maurizio 1619 in the Langhe, where the dialog between the extension and the historical structure of the monastery emerges with strength.

In the project for Casa TRBC a continuous, single space takes shape, broken up by a functional rhythm  connecting the different parts of the house. At the center of this logic, which is used to provide spatial continuity, is the wood paneling, which at the same time hides the concrete walls, separates the sleeping area with a sliding door and hides the kitchen, making the living area a totally flexible space. 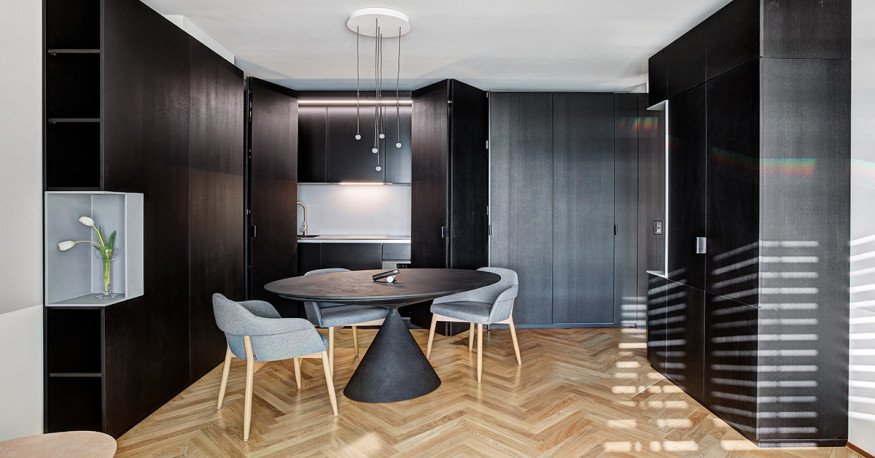 Aside from the furniture, another element which guarantees the spatial continuum is the shower, which is a filter between the sleeping area and the bathroom. Thanks to lamatilde’s intervention, a tiny space gains value through flexibility, opening up to different uses and setups by means of furnishing accessories, with no walls or doors. 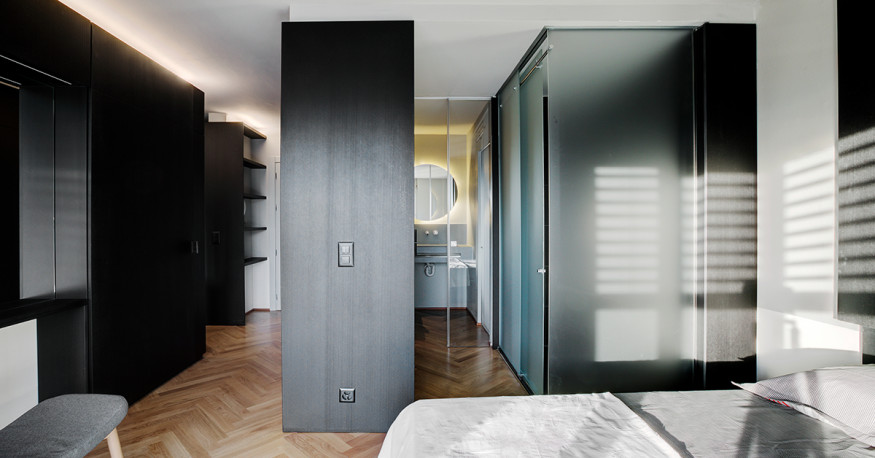 In Casa TRBC the attention to details is the heart of the project: from the smallest ones of the furniture to the overall space composition. Something similar can be said for the three Gaudenti 1971 stores in Turin.

Gaudenti 1971 is a new format which combines the dimension of Italian pastry shops with the more international one of bakeries, and this new format was the starting point to define space, with the double goal of respecting the values of traditional Italian culture and a desire for renewal. The translation of this approach lies in a careful renovation of the existing elements, integrated into the new decor and the new graphic motif which characterizes the different stores of the group. The new image is given by the use of blue velvet and wood, which also ensure new, immediate brand recognizability, other materials – for example brushed brass – have a “noble” inspiration but are treated differently, to give sobriety to the entire decorative apparatus. 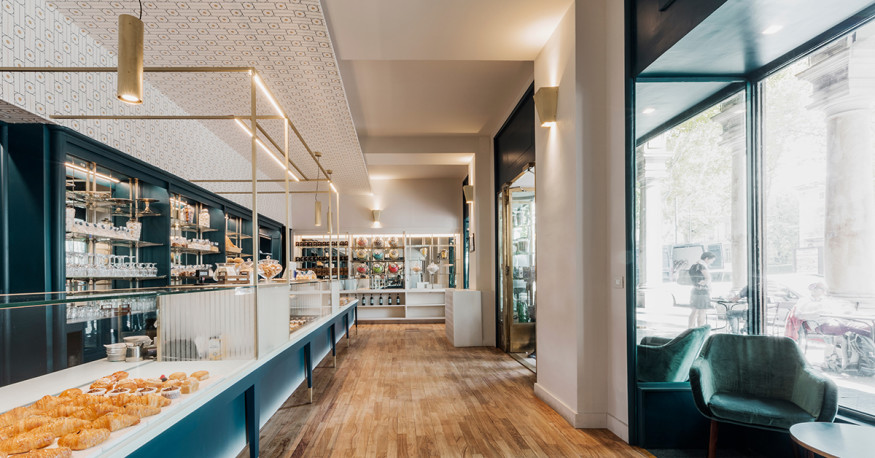 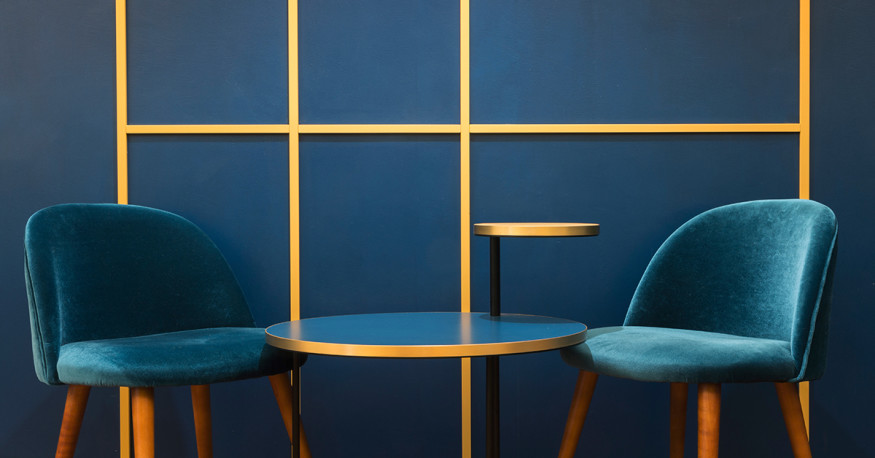 The interior projects for Gaudenti 1971 show a particular relationship with preexisting elements, a sort of respect which appears more clearly in the restyling of Villa Crespi. The Moorish-style villa, inspired by buildings in middle-eastern countries, was built in 1879 by entrepreneur Cristoforo Benigno Crespi at Orta San Giulio.

The lamatilde firm chose a relation with the context which is “respectful” of the eclectic style of the building, while also oriented towards a new interpretation. The project is structured contaminating what already existed with the design of new elements, following in the footsteps of past projects which made Villa Crespi an elegant architectural “eccentricity”, as stated by the Turin-based designers. The decor focuses on the dining rooms, the cocktail bar and the garden, using a variety of combinations of materials. In the restaurant, while the hue of the walls is toned down, the lighting system is redesigned to make the rooms cozier and more theatrical. 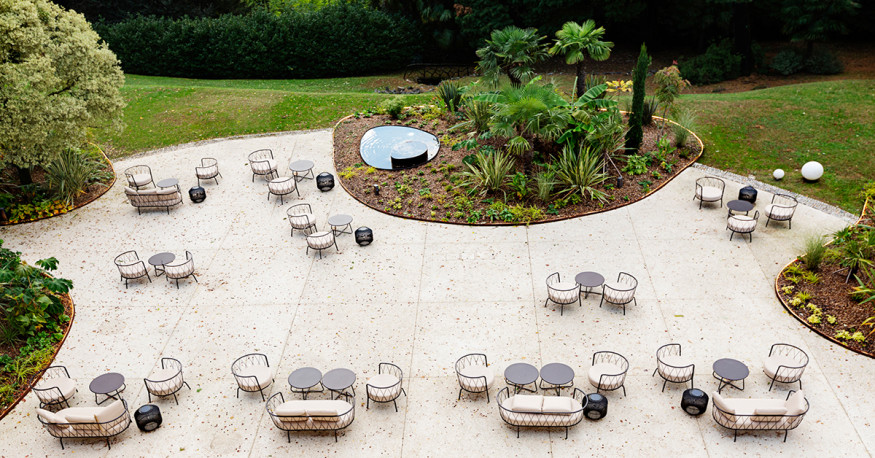 Finally, the installations are hybrid objects which change gradually from mirror to glass, they reflect and let the surrounding architecture transpire. In the cocktail bar, the precious, sculptural counter is made of Carrara marble of the Calacatta Oro type, with a sheet metal base and a black iron bottle holder, representing the most outstanding element of the decor. In the garden however, in line with the villa’s Moorish style, six green islands are created to complement the new paving. All this constantly combining the “architectural” works with the study and design of all furnishing elements: from the centerpieces centerpieces to the sideboard to the tables. 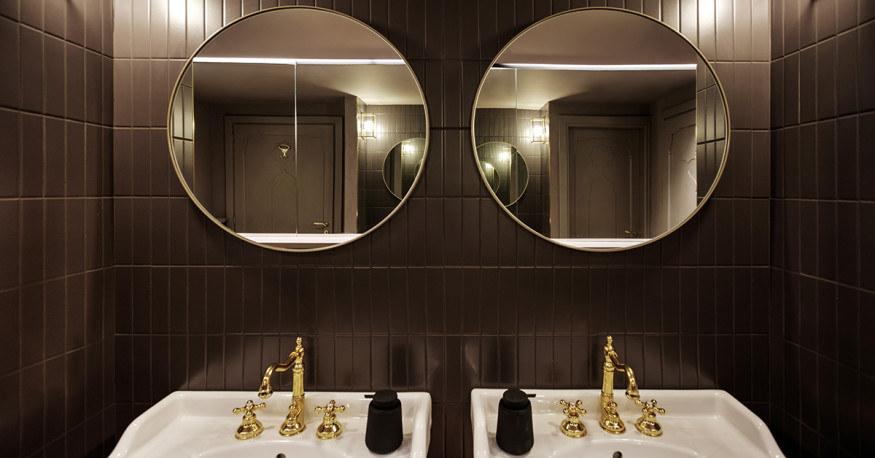 Villa Crespi fully expresses lamatilde’s general approach, where its innovative and inclusive offer emerges even more clearly, based on the fusion between the language of composition, of the built environment, with the visual one of the company’s new identity, from furniture to objects, from architecture to design and graphics.