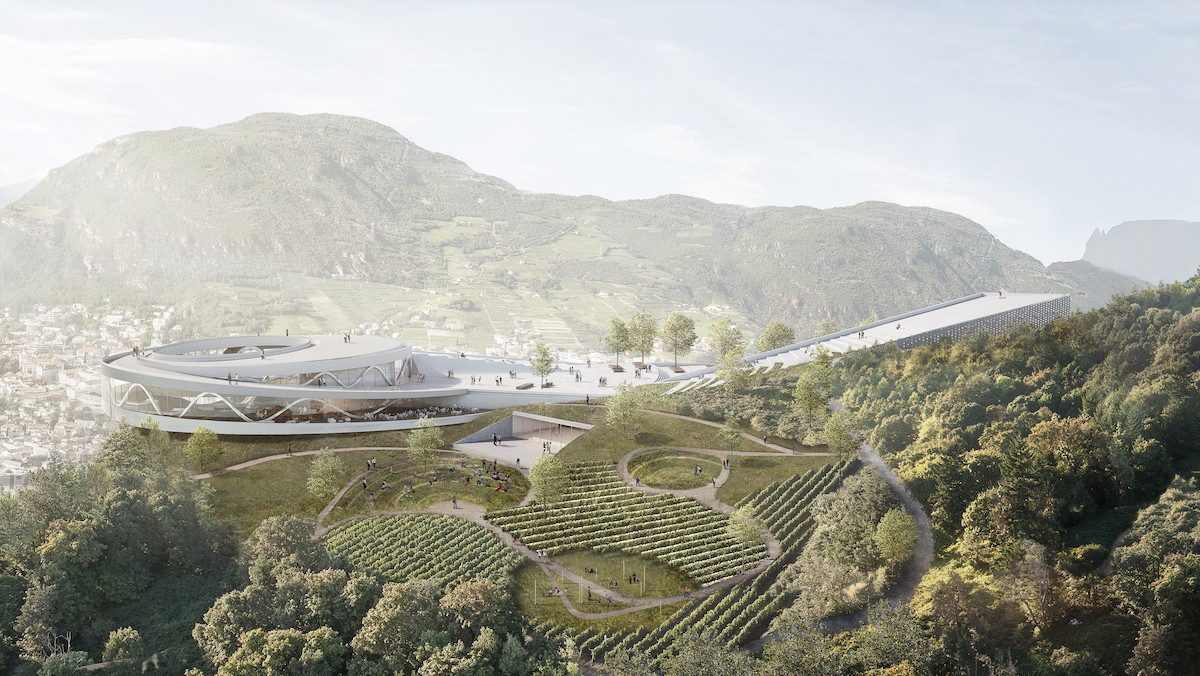 Snøhetta’s museum for Ötzi in Bolzano

The proposal for the new museum quarter in Bolzano on top of the Virgl mountain: a spiral-shaped building blended into the landscape will house the “Iceman”

The Norwegian firm Snøhetta has designed a spiral-shaped museum on the mountains of South Tyrol to accommodate Ötzi, the Similaun man found in the glaciers between Italy and Austria in 1991. The building was designed to blend into the surrounding topography and provide a privileged view of the mountains.

Inside it, the new Museum Quarter will accommodate the South Tyrol Museum of Archaeology and the Municipal Museum of Bolzano, on top of the Virgl mountain, the rocky crag of Mount Pozza, overlooking the city of Bolzano. Visitors will reach the Quarter thanks to a new cable car system, also designed by Snøhetta, and will be able to visit both museums through an open area on the roof and a joint foyer. The new cable car will replace the previous one, built in the ‘50s and abandoned in 1976, making the area accessible again. It must be said that the Virgl mountain has always been an important site for the South Tyrolean capital due to its historical and cultural meaning, with its prehistoric and Roman traces as well as its green majestic space which opens up in the Alpine valleys.

René Benko’s project for the Virgl mountain designed by Snøhetta 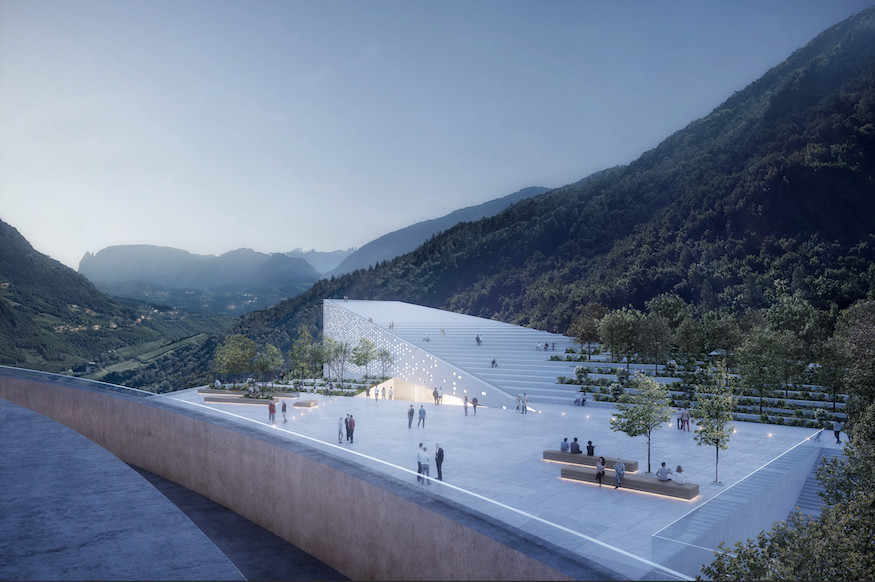 The project by Snøhetta is the result of an international competition promoted by the Signa Group, founded by Austrian real estate investor René Benko. Benko recently hit the headlines when he bought the Chrysler building in New York, after purchasing several important pieces of the city of Bolzano over the past few years.

The project, presented to the City of Bolzano about a year ago, was recently again at the center of the debate again after Benko’s company managed to obtain the entire ownership of the land on the Virgl mountain to develop the project itself.

The new museum quarter on top of the mountain will be a terrace for the city’s inhabitants, a reference point for the area, a public space connected with the territory and blended into the landscape. In particular, the new building will consist of a glazed spiral-shaped volume, a barycentric square which will be a space for events and the market and steps, overlooking the square, which will be a seating area for events and at the same time provide panoramic views of the landscape. 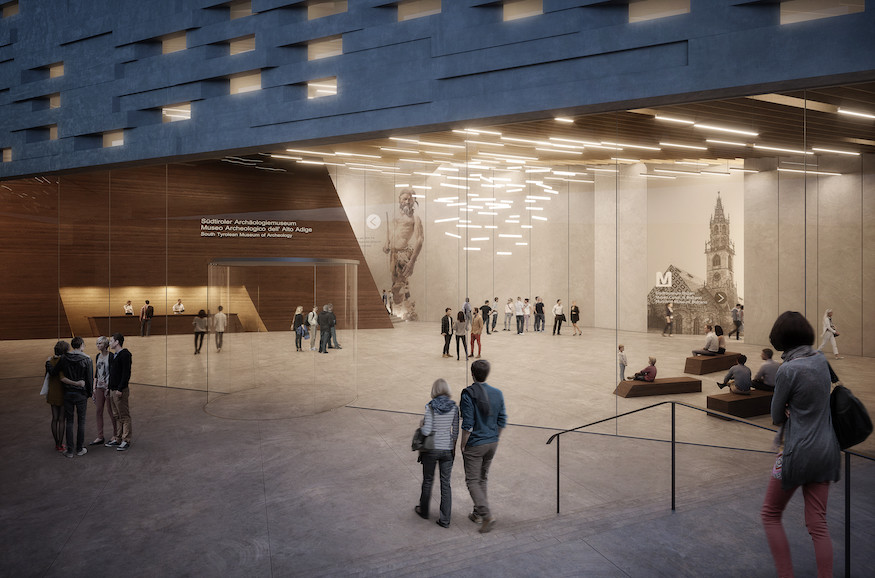 The museum will accommodate Ötzi, the Iceman, the oldest European mummy dating back to a period between 3300 and 3100 B.C. (Copper Age), a crucial discovery for the understanding of human evolution. The prehistoric man was found in 1991 with a full assortment of intact clothes and tools, thanks to the ice of the Simulaun which preserved his body and allowed us to find it 5,300 years later.

As stated by Kjetil Trædal Thorsen, partner of Snøhetta:

The new Museum Quarter will create a synthesis of city and nature, of history and future, of building and landscape, of culture, leisure and knowledge [..] Visitors can meet Ötzi the Iceman, one of the most important archaeological discoveries, on top of the Virgl mountain – a place with a historic atmosphere. They will literally slip under the skin of the mountain, entering it to see the Iceman.

A project which is one with the landscape and recounts a strong connection between nature and architecture in Snøhetta’s project, an inclusion which is mirrored by the recent “underwater restaurant”, a volume which is literally immersed in water. 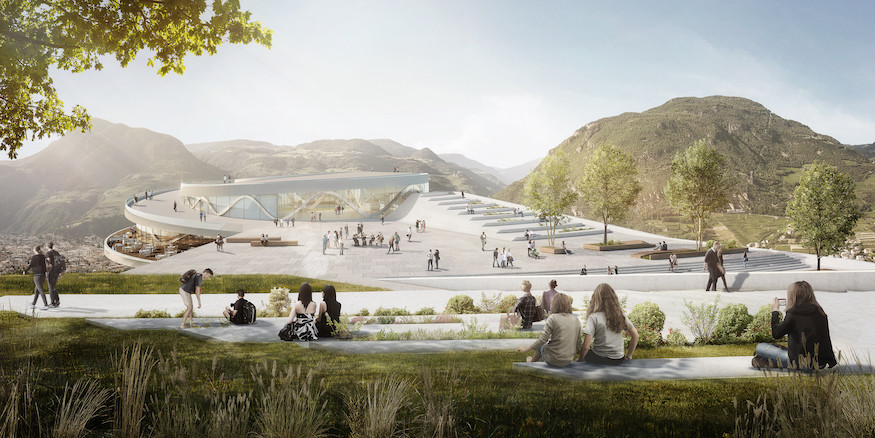