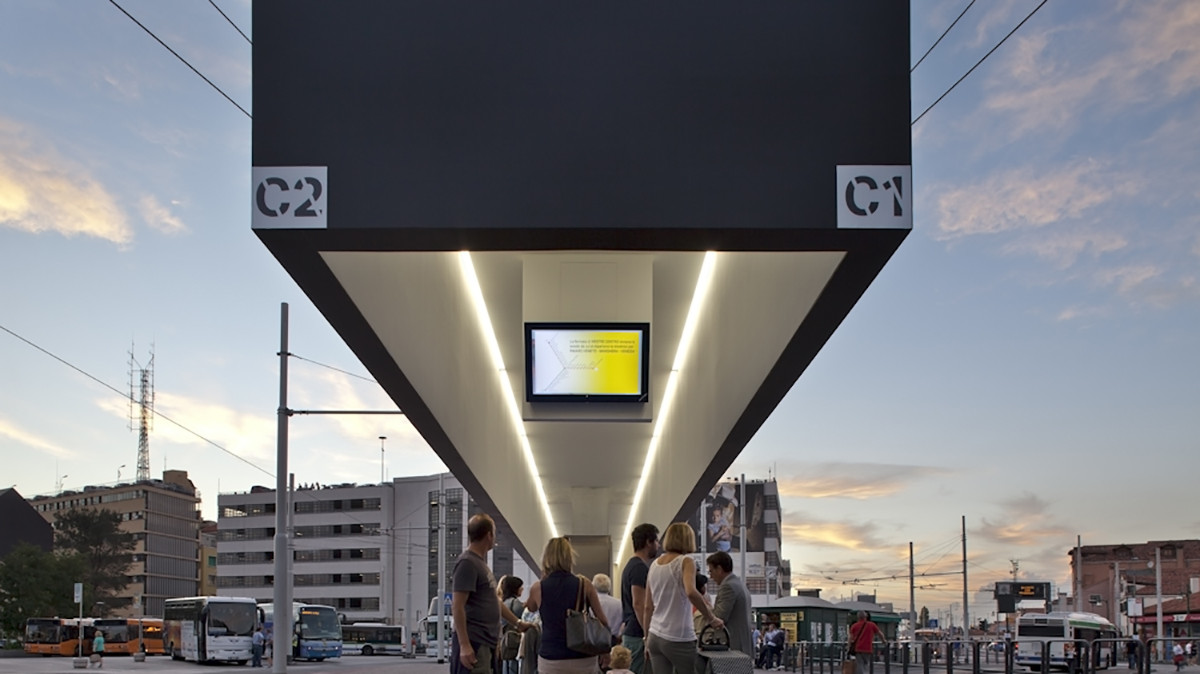 On the occasion of the “Architects’ Festival”, the National Council of Architects (CNAPPC) presented prizes for architects and Italian buildings.

The prizes for “Italian Architect” and “Young Talent in Italian Architecture”, as well as honorable mentions for various architecture projects, were presented in Venice, during the “Architects’ Festival 2018”.

Like the American Institute of Architects and the Royal Institute of British Architects (full article here), the National Council of Architects, Planners, Landscape Architects and Conservationists (CNAPPC), along with the network of territorial Professional Associations, selected the designers and buildings which stood out in the Italian scene. In particular, the jury was presided over by French architect Dominique Perrault, Ilaria Marelli, architect and designer, Emilio Caravatti of the caravatti_caravatti firm (named Italian Architect 2017), Elisabetta Gabrielli (named Young Talent in Italian Architecture 2017), CNAPPC councillor Alessandra Ferrari and Paolo Raffetto, president of the Professional Association of Architects, Planners, Landscape Architects and Conservationists of the Province of Genoa. A difficult task for them, with over 400 projects submitted, which culminated in the assignment of the most important awards to Map Studio and the Orizzontale collective.

The sixth edition of the Architects’ Festival, after the previous edition at the MAXXI in Rome, was held at Ca’ Giustinian, headquarters of the Venice Biennale, during the final days of the International Architecture Exhibition. The initiative started in 2013 organized by the CNAPPC, 90 years after the professional association was founded, and as stated by councilor Alessandra Ferrari it is “a moment for sharing and reflecting on architecture and the architects’ work: celebrating it therefore means giving visibility to the value of transforming the territory by means of high-quality projects”. A tool for promoting the quality of Italian architects’ design, an innovative way of looking at the territory to select the most original ideas, which are also mindful of the territory itself.

The award “Architect of the Year”, supported by the National Council of Architects (CNAPPC), is a tool for promoting and reflecting on high-quality Italian architecture

The decision to name MAP studio, the Magnani Pelzel Associated Architects firm, “Italian Architect of 2018” for its tramway terminal project in Piazzale Roma, Venice, follows this perspective. The agency, founded in  2004 by architects Francesco Magnani and Traudy Pelzel, has its headquarters in the historical center of Venice and has been involved in architectural design and urban renovation, the restoration of existing buildings, interior design and installations for many years. Its entire production has developed using the specific details of the site, the program and the client as a starting point, and this is also the case of the tramway terminal in Piazzale Roma. The shelter is located in a complex space, characterized by an incremental development and the presence of functional elements; the project, as stated by the firm itself, “acknowledges the inability of the place to provide and define an organizational element, suggesting not only a solution characterized by its horizontal dimension, but also an element capable of defining a waiting space, through the design of an apparently suspended volume, a sort of outdoor room”. 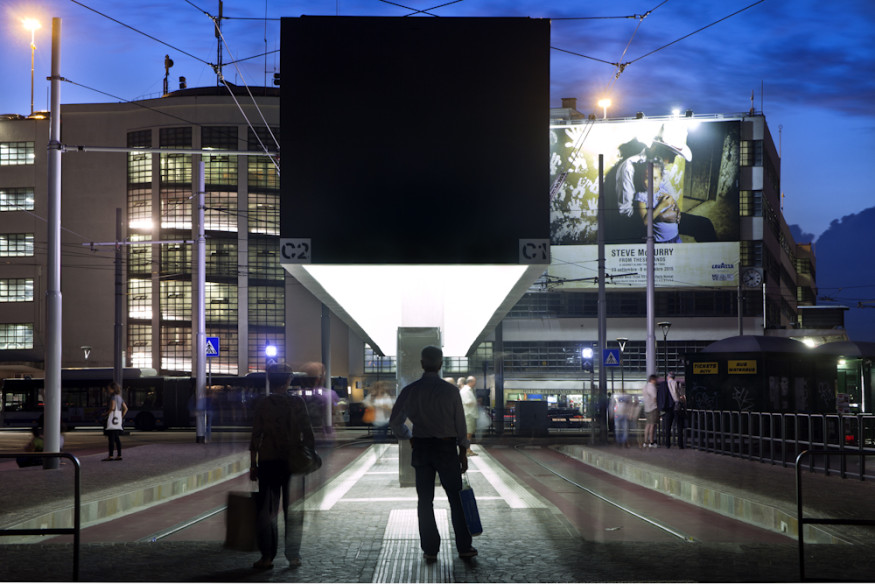 Map’s construction aims at providing shelter for the new tramway platform and to do so it uses a 32.50m prismatic beam supported by a single central footing point. The prism is hollow inside and contains all the technological elements, while the outside is covered by a dark gray steel plate, which counterbalances the brightness of the inside. Thus, in the evening the element defines a very bright environment capable of guiding the users and providing a new image of the tramway line between Mestre and Venice. 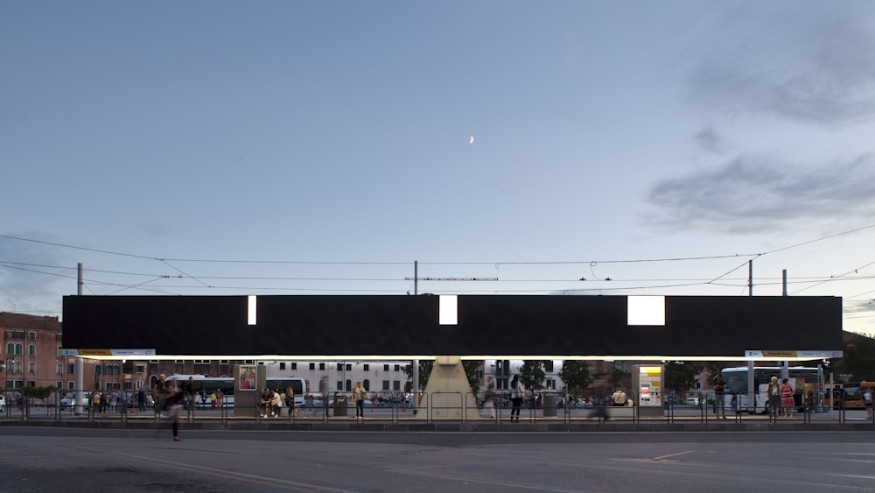 Something similar can be said about the 8 ½ project by Orizzontale, the collective based in Rome and named “Young Talent in Italian Architecture 2018”. Once again, the award went to a delicate and respectful type of architecture, a project which adapts to the context it is developed in. The temporary installation “8 ½”, a clear reference to Fellini, was presented by its authors as a “mobile, portable theater, a machine for inhabiting the public space. It is a reflection on the double nature of public space, a space for privacy and relationships, but also inherently a territory for events and representations”. The project is the result of the international contest Young Architects Program 2014, organized by MAXXI and MoMA, won by the Orizzontale collective. The installation, built in 4 weeks, developed around the deep contact with the outside of the museum building designed by Zaha Hadid and was composed of two elements: the wall and the arena. The former was to be used as the frons scenae for shows, an 8.5m-high element built with modular wooden frames covered in recycled beer containers. The arena instead was made of four “relational objects” and a light cloth covering, supported by a structure divided into blocks.

Aside from the two projects by Orizzontale and MAP studio, the jury of the CNAPPC prize also awarded four honorable mentions: one for new buildings went to the project “Sei case in linea” by Mascazzini and Guarnieri, another one for restoration and reclamation projects was given to Bergmeisterwolf Architekten for the Cantina Hotel Pacherhof, for the installation and interiors category the mention went to the installation The Perfect Density at the B&B Italia by Migliore+Servetto Architects and the last one went to the ARIS Architects firm for the design project “Archetipo”.