The director designs the interior of the Rome Aesop store.

As you walk through the center of Rome, in the San Lorenzo neighbourhood, you can now see the new store designed by the director Luca Guadagnino for the Australian skincare brand Aesop.

On the corner between Piazza di San Lorenzo in Lucina and Via Leone, the director of Call Me by Your Name and Suspiria shows us a bygone Rome, the identity and heritage of an age-old city. The entrance on the square and the window along the street, which was originally an ancient opening framed by a travertine portal, open onto the small space inside the Aesop store, with its microcosm of references, from Alberto Moravia to Cy Twombly, ingredients pieced together in an elegant, tidy, almost monastic space. A sense of sacredness emphasized by the marble, the cream and mocha travertine floors, inspired by the nearby domus eclessiae: the church of San Lorenzo in Lucina, conceived as a dwelling set up as a place of worship and refuge. Another clear reference to sacred architecture is the basin, a stone monolith, which recalls a baptismal font.

Furthermore, the measure of sculpted-rock elements is counterbalanced by the movement of the false ceiling made of straw sheaths, of various shapes and dimensions, with small spot lights. A movement emphasized by the golden reflections of the metallic elements, small details, recalling Rome in the ‘50s, a shiny city and an intellectually dazzling season.

The choices for the interior seem to want to narrate the great conflict between past and modern, a juxtaposition which inspired Pasolini’s work, a contrast between the ancient buildings in the city and the surrounding countryside which reveals itself in its violent strength.

Fascination and references rooted in the history of Rome, in its culture and protagonists, which become material to shape and assemble

In the 42 square meters of the Aesop boutique the different materials seem to fit harmoniously in the clayey facades, the ecclesiastic architecture and the imposing marble monuments. The elongated space is occupied on the sides by red and cream-colored lacquered shelves, alternating with the higher bakelite stands, a tribute to the black rim of Pasolini’s glasses, which house the products of the Australian company, while in the middle a large pendant curved Murano glass lamp once again recalls the ‘50s. Guadagnino takes us into Carlo Scarpa’s universe and the care for details: engravings, insertions, shutters and contrasts. 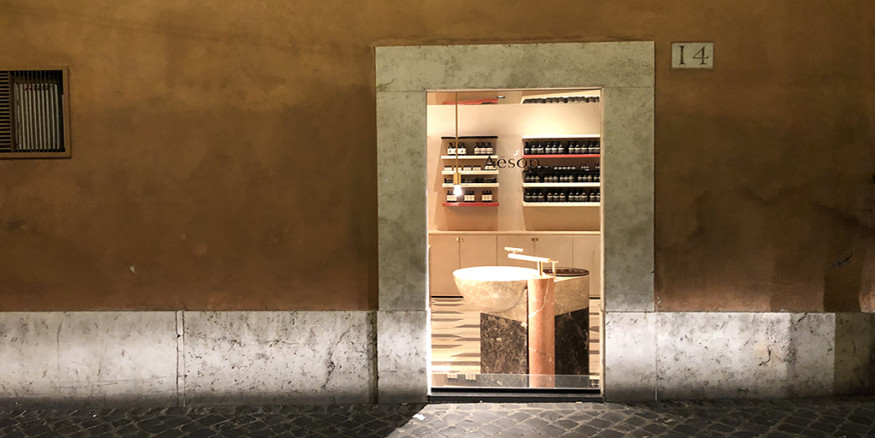 An ode to the eternal city which narrates the flourishing relation between architecture and cinema, already explored in the movies by the director from Palermo, just think of the villa in Crema where the love story between the two protagonists of Call Me by Your Name is set, or the home life of the rich family of entrepreneurs in I am Love, set in the 1930 spaces of Villa Necchi Campiglio by the architect Piero Portaluppi in Milan.

Guadagnino’s experiment for Aesop has a precedent in the project – also recently completed – of the villa on Lake Como for Yoox founder Federico Marchetti. The house, called La Filanda (The Silk Mill), revealing its original use, is a luxurious tribute to 21st century design, color and the material nature of architecture.

Guadagnino’s modus operandi goes well with Aesop’s marketing strategy based on a modern approach to the idea of luxury brand. It is enough to mention the words said by its founder Dennis Paphitis to Dezeen: «I was horrified at the thought of Aesop evolving into a soulless chain. [..] I’ve always imagined what we do as the equivalent of a weighty, gold charm bracelet on the tanned wrist of a glamorous, well-read European woman who has traveled and collected interesting experiences».

The skincare group has always stood out for its specific direction in the retail sector: inviting famous and emerging architects to design Aesop stores which are always different and always consistent with the context they are in. Not only Rome, but Los Angeles, with the cardboard-tube environment designed by Brooks+Scarpa or the cement molded by Paulo Mendes da Rocha for the store in Sao Paulo in Brazil, or Snøhetta with the choice of finely molded architectural elements for the stores in Norway and England.

Products on display, clearly visible, the constant presence of an element recalling water: a tub, a simple faucet or a baptismal font, and many possible taxonomies for the composition of the interior space.