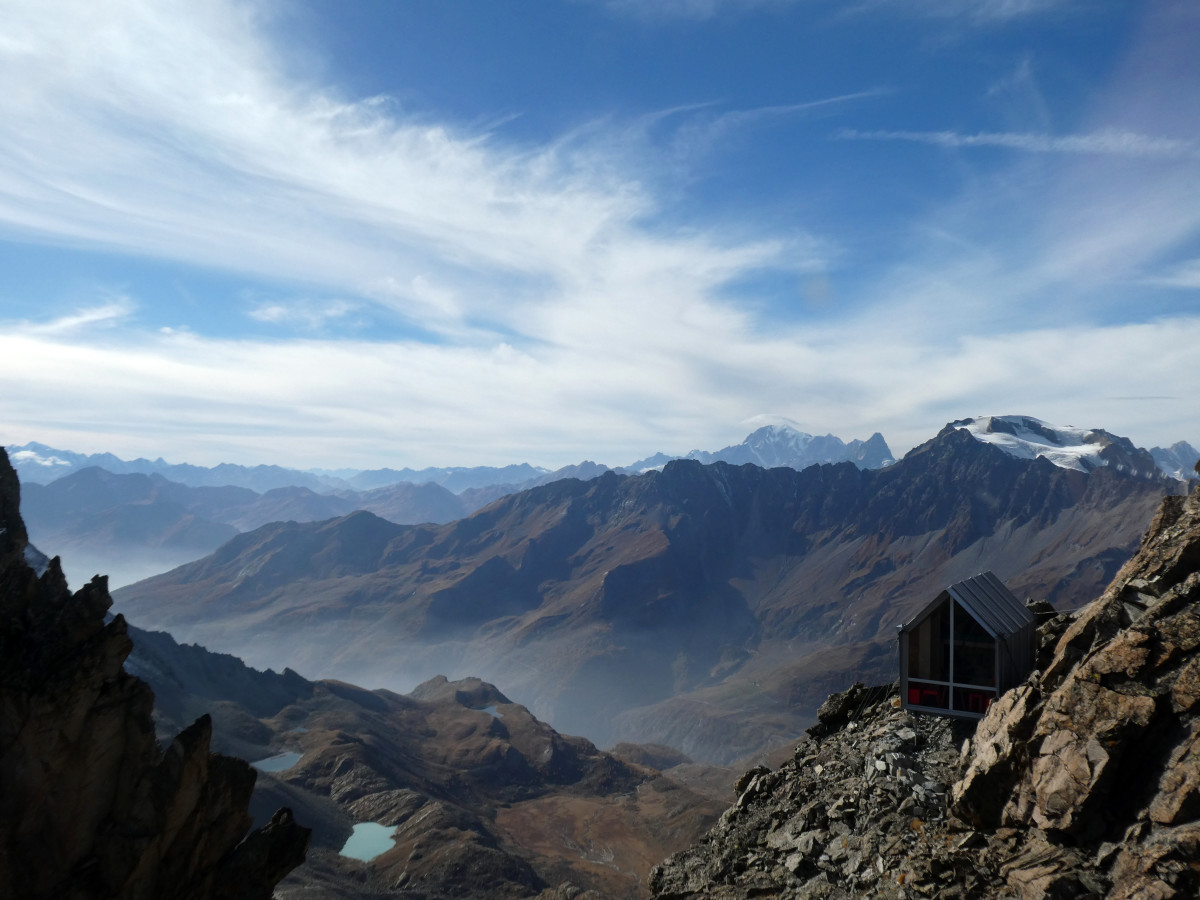 On September 10, 2018, the new bivouac named after Luca Pasqualetti and designed by the architects and alpine climbers Roberto Dini and Stefano Girodo was installed in the Val d’Aosta Alps, 3,280 m above sea level, on the Morion ridge. Talking about it implies imagining the place where it is set, the ruggedness of the ridges and the snow-covered mountains, following the complex itinerary to reach it, listening to the silence surrounding it. Narrating the project instead provides opportunities for interesting reflections on the relation between architecture and landscape and sustainability, retracing the building process, the materials chosen and its different construction phases.

First of all, giving life to this type of building represents an extraordinary design challenge both in terms of efficiency and resistance: there was the need to build a structure isolated from any type of network and capable of withstanding the combined action of extreme weather conditions (temperatures lower than -20°C, winds up to 200 km/h, intense precipitations and meters of snow on the ground).

The hardly accessible location, which can be reached only after a three-day journey, is on a rock ledge between Punta Gaia and Becca Crevaye, with its characteristic and scenic hole in the rock, along the Morion ridge which divides the Ollomont Valley from the Bionaz one. A privileged position in terms of landscape, which allows to overlook the highlands, with views on Mont Vélan, the Matterhorn, the Monte Rosa and Mont Blanc.

The Pasqualetti bivouac was designed in 2016 and created in different phases: its four modular units were built in a carpenter’s workshop, then transported by truck and helicopter after the basement was installed on the ridge; finally, it was assembled at high altitude in one working day.

The building is conceived as a hut with two pitches where, if compared to classic barrel-shaped “Apollonio” bivouacs – which take their name from the engineer Apollonio who invented them in the early 20th century – a structure with sharp edges was chosen, as it better fits the jagged geomorphology of the ridge. Furthermore, special attention was paid to the chromatic integration with the surrounding rock context, obtained by using a gray tone for the aluminum cladding enveloping the bivouac.

As to the structure, the components were entirely assembled dry, using no concrete, and are all recyclable and ecologically certified.

The structure is the essential answer to logistic and environmental problems, representing at the same time the continuous and fertile dialog with the surrounding landscape.

The harsh environmental context and the extreme logistics required great building simplicity combined with the greatest performance efficiency in terms of protection and insulation.  The high quality of the materials and finishes guarantees durability and wear resistance, while preserving the living comfort and reducing future maintenance.

The interior of the bivouac is conceived as a cozy and protected shell, a small space optimized – also in its furniture – for the mountain climbers who will reach it. In terms of distribution, the entrance is located on the side, a barycentric position, and creates a division between the living and sleeping areas inside. This allowed the opening of a huge panoramic window on the main facade facing east, offering the possibility to enjoy a wonderful view of the Val d’Aosta Alps, as well as ensuring good solar gain in terms of light and internal temperature.

A project studied in great detail, sustainable in its building process and structural and material components, a refuge for 8 mountain climbers with the ambition to show a “measured” way of building, careful and sensitive, the result of a shared work aimed at giving new life to the mountain itinerary and celebrating the memory of a young mountain climber.

A temporary element, whose structure can be removed at the end of its life cycle, to return this place to the mountain without leaving any traces.